The Backwards Bus - a Vivid Dream 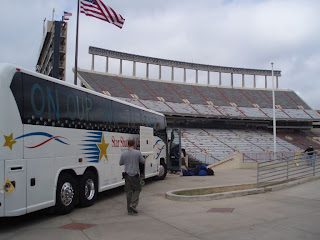 A few nights back (Dec. 13) I had a very vivid dream. I was driving a bus. I vaguely recall that there were other buses with me as we were traveling down the road at a high rate of speed. I remember that we were traveling about 70-75 miles per hour. I was in a pretty intense state because the most curious thing was that we were traveling backwards. I was amazed as I sat in the drivers seat observing what I would normally not be able to see, directly behind the bus (I have driven school and charter buses since 1979). I was especially astounded as the bus stayed in its lane perfectly. I was concerned, but also felt a level of, "oh, I guess I have to just trust, because we are staying in our lane perfectly". There were other cars but I did not really take much notice. Then another worry entered my mind. What am I going to do if I have to stop? Not long after this I found out. I hit the brakes and the bus just swirled around on the highway, perfectly in the lane I was in, and came to a stop at a stop light. I don't remember any more after that. I don't know if I woke up, or what. But I have since been sharing the experience with others because it seems to be a profound metaphor, possibly a prediction of what is coming to be, or already is.

The first person I told this dream to was Desmond Green. He found it to be a very profound declaration, of sorts. A beautiful omen, or forecast. It feels that way to me. I had written and spoken a great deal about "the upside down world", and "turning this bus around", but I had never had such a powerful dream experience. Another metaphor that I have used many times is that we have been living our lives similar to driving our car by looking in the rear-view mirror (all the emphasis in the collective about history, old stories, etc.) What my interpretation says is that this has been our experience as a collective. We have been living blind to the truth of where we are going, and that we can trust God/Source/All That Is because it truly is driving the bus. In our not seeing down the road we have experienced all kinds of fears, but the bus is on track. We just have to trust. Now, the bus is turned around and we can see out of the windshield and we can drive with a clear view.

picture is from when I drove a charter bus and got on national TV for the show "Friday Night Lights". It was the season finale for 2009, Underdogs. I didn't get to see if I really got on until 2012, from Net Flix.

Another interesting spin on "bus driving" was this year my Texas license expired so I had to renew in Illinois - Jan. 2012. I had had my CDL for 30 years and decided that I didn't want to drive bus any more so I let the CDL expire. A few months later I was called by Midwest Coaches, the company I had driven for in Ames, Iowa to put myself through college, and they asked me to drive again. This was for, by far, the longest tour I ever had driven. I accepted the opportunity and through a whirlwind process got my Iowa CDL again. I drove a two month tour with the Glassmen driving something like 13,000 miles, approximately 20 states, 40 cities. It was an incredibly challenging, tiring, but amazing experience. Amazing mainly because of the kids and their music. I also feel that there was possibly a much greater purpose. I have a PhD in environmental geography. I have experienced "space and time" and the human/Earth relationship very dramatically. I have also connected with Earth, spirit energies in this lifetime. I suspected that I was accomplishing some kind of "energetic neo-mancing" - self defined as "new earth, energy, grid movement and grounding". While I was with the kids, and found their music touching me deep in my being as they played, in these Roman colosseum type stadiums, feeling chills, joy upliftment, I would intentionally imagine that there was like a tornado type vortex of love energy being grounded as we traveled across the country in each of these places. The passion for music, for acheiving the best that they could as a group, was grounding love into the Earth and helping to heal this country where we have gotten so far astray from the truth of love and our being-ness of one with ONE. It was interesting because many of the places that we visited were centers of many of the "ills" of the today, either actual, or historically named, just a few were there were many more - Bentonville, AR, Washington DC, Chicago, Rome NY, Atlanta GA. I don't know if this interpretation is true, but it sure was an interesting experience and one that I will never forget. Here is the poem that I wrote on July 14 while I was on the tour, the first and only significant writing during the trip, which is also unusual because I usually write much more often - interestingly called Crystalline Reflections

There is more to this theme of sand, glass, crystal, music, harmonics, co-evolution between carbon and silicon that I might share about. There has been this ongoing theme stemming from as far back as my teen years, but I may wait to write about later. Or, I may not. What I do know is that we are waking up, because I am waking up to a much greater Awareness. It really connects, and validates an experience I had over 30 years ago Thirty Years to Tell this Story, and then another mind-expanding experience My Burning Bush.
Posted by Andy Skadberg at 10:42 AM